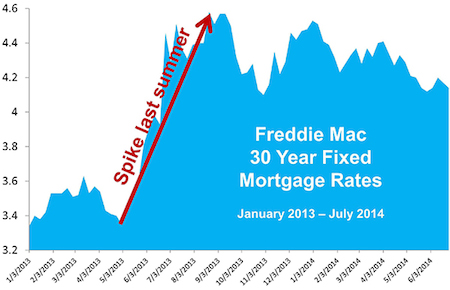 Investors in financial commodities such as the dollar and government bonds have been watching very closely at mortgage rate trends, primarily to see if the Fed will push interest rates up. According to Bankrate.com, a national survey firm of big lenders, the 30-year fixed rate mortgage level is down from 4.31 to 4.30 per cent. It may be a small dip but when you think a year ago (in July 2013) this figure stood at 4.56 per cent, you can start to see a downward trend.

Even the benchmark rate for fixed 15-year mortgages was down from 3.41 to 3.40 per cent in the space of just a week. The thing is rates have been in some kind of financial hibernation for what seems like ages and this might be explained by a series of unstable economic figures that have been coming out.

But experts believe rates might well start to fluctuate during August and September but they are certain to stay well below 5% for some time to come. Earlier this year, experts had predicted that the mortgage rates would start to rise and it has come as a bit of a surprise that here we are, more than half way through the year and the rates are still so low. 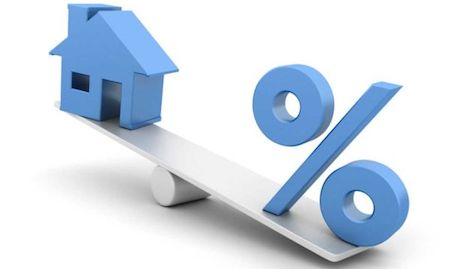 It seems that the prime factors that so often move the markets have a very small effect. In other words, a piece of economic news will come out and suddenly the markets move – but then, just an hour later they drop back to the very position they were in before. The pause in massive rate changes has to be down to confusion within investors; they receive economic news and act upon it but caution and fear prevents any chance-taking and opportunistic investing such as the likes we saw back in the earlier years of this century.

Take the example of the latest figures released on unemployment; this ratio of those out of work fell sharply and that means with more people in work, spending should go up. But consumers are still very cautious about spending money and if you don't spend money, the economy just can't get going. Moreover, a stagnant economy means growth cannot happen and interest rates are likely to stagnate too.

Home buyers are wary – very wary. The housing market downturn around 2007 clearly still has a long-lasting and damaging effect on us, and will do so for several years to come.